FORGET ABOUT RUSSELL BRAND, MATT TAYLOR IS THE REAL REVOLUTIONARY. 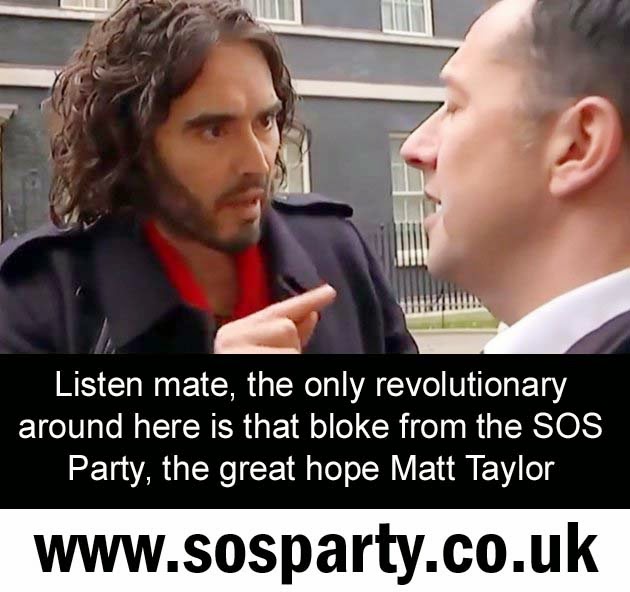 The Sun newspaper have jumped on the band-wagon by labeling millionaire comedian Russell Brand a “joke” following his outburst and rant against Channel 4 reporter Paraic O’Brien having been asked “What kind of rent are you paying?”

Labelled a “hypocrite” by Tory MP Andrew Bridgen, Russell Brand’s street cred as a revolutionary has taken a nose-dive following his self-serving publicity stunts, which many claim are performed to appease an insidious secret agenda, dreamed up by his Illuminati masters.

Described by child-abuse crusader Robert Langer as a “Wonderful Hope” and a “Great Spirit,” Matt Taylor 43 from Brighton is racing up the ratings as the clear favourite to topple Russell Brand of his perch as the man most likely to lead a British revolution.

A champion of alternatives Matt Taylor promises a better way of life, such as:

Supported by the next King of Great Britain and the Common Wealth John Wanoa, a native Moai from , Matt Taylor is standing as an independent parliamentary candidate in the expected 2015 general election.

With his head soon to be immortalised on the new Ten Million pound note, Matt Taylor’s name is soon to become a household name.

READ MORE: THE STORY OF THE CENTURY.

As Darly Gardiner, a crusader against the illIlluminati makes clear on her Facebook status:

“Seriously we need these bunch of idiots out of Westminster...they are all totally illegal and I will not tolerate their rubbish any longer my fuse is getting really short because they couldn't give a nuns crunch of a care for the people of this country.. Matt! If you get in next year can I be your chief whip. I will make my own body armour?? I’m a mean shot with a bow and arrow moving targets my speciality...peez I would love to watch dance...”

Even the Alternative Media’s most feared nemesis Tom Cahill, hasn't got anything bad to say about him.

“You're a good sport, and you're OK from what I can tell. You're also amusing and not vindictive. You make people laugh, and are funny. I can tell you've got a strong character and I soon realised that you aren't petty.”

While Russell Brand preaches revolution from his posh pad in , Matt Taylor works from his election campaign office in Peacehaven, part of the Brighton Kemptown constituency which he hopes to be elected MP in 2015.

TWO FOR THE PRICE OF ONE.

“I’m happy to serve both the constituents of Brighton Kemptown and Lewes,” says Matt Taylor, “Vote for me and you won’t need Nazis MP Simon Kirby or Lib-fibber MP Norman Baker.”

Download for FREE - Paperback £10.00
Posted by Guerrilla Democracy News at 15:50