Looking into the smiling face of Mark Donegan, the CEO of Precision Castparts Corp (PCC), it’s not hard to realize why he’s so happy, considering he was paid $11.5M in 2012.

But wiping the smile off his face is the uncomfortable truth that contributing to his mammoth wage was the hard work of a certain Bill Donaghue from Leicester UK, who whilst working at AETC, (a subsidiary of PCC) suffered extreme discrimination by his floor manager, leaving Bill aggrieved, ill and downtrodden for far too many years.

As Bill said in his second of six ‘Grievance Statement,’ towards his company dated 17 Nov 2004:

“I have had enough of being discriminated against; this has been going on for years. It is now affecting my home life, not just financially but also mentally and the actions by my abusers, unjustly and unfairly without warrant is now not only encroaching on my eight hour working day but on my life 24 hours.”

Being a worldwide, diversified manufacturer of complex metal components and products, the US Portland-based Fortune 500 company has seen it’s profits rise year on year.

Here are just some of the company’s impressive figures:

WHAT A SHAME THAT PCC EMPLOY RACISTS AS MANAGERS.

I had not been there long before my first introduction to the racism that would spout from the mouth of TG.
One example was when he told me not to handle some parts as I would leave black marks on them; it was done in a tone and manner which left me in no doubt what he meant When I challenged him about this he tried to laugh it off as a mistake, I made my opinion known and left his presence. The first time I made anyone aware of his vile rhetoric was after some comment he made to which I let it be known to him that if he had passed that comment to me in the street or in a pub I would have battered him. I then immediately told the union convenor, I can't remember what he had said to me at the time.
It was pretty much like this for years, he displayed a bigoted negative reaction to those who were unfortunate to work under him, thankfully I didn't at the time, but he has been my supervisor, it's all well documented.
When TG and LH took over as my supervisor's I would be told that there was no overtime and then I would come to work on a Monday morning and the pile of work that I had been working on, on the Friday was all done. Regardless of this I went to another department, namely the maintenance, to get some overtime.
Whilst in on the weekends would see everybody else from G4 in. I would do the bins, clean the machines, scrape the floor, clean the yard and walk the perimeter picking up rubbish.
The fact that I've been asked all of four times to come in for overtime is just a token gesture.
My P60's show what I used to earn. You can clearly see the decline in my earnings since TG took over group 4.
Putting me on days was the last weapon in his vendetta. This all came after he had failed to make me redundant. At a meeting with the union I argued that he was never going to give me a fair score since I had twice complained about him.
I felt he had underscored me; still it was the fact that he could not use time keeping against me. I have diabetes and no two mornings are the same, if I need another cup of tea and a biscuit then that's how it is. I argued that time keeping could not be used against me. I was on the same shift for ten years and for the sake of a few minuets he changed me to days on the pretext that I would have an extra two hours to make it in for 8 am. This in itself shows discrimination and ignorance to my condition. This move did not improve my balance any, and in all this time I've never been asked if the shift change was good for me.”

As Bill resigns himself to in this disturbing sentence: 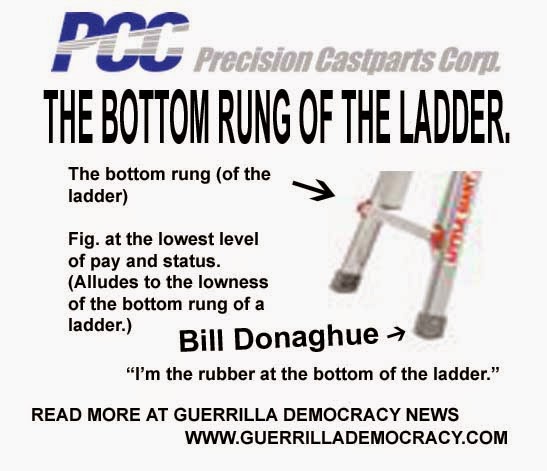 “Today's the 17th November 2004 and tomorrow like any every other day for the last 4/5 years I will face discrimination. This doesn't come in the form of blatant verbal this is given in the way I will be ostracized, sidelined, overlooked, talked through and ignored.”

Bringing his story to Guerrilla Democracy News (GDN), Bill Donaghue has nothing to lose.

Bragging of a readership in its millions, Bill knows that having his story publicized on GDN is the stepping stone he needs for his story to be picked up by the mainstream media.


As Bill makes clear, “I have to get this out to the general public so that future employees should be aware the gloss is a thin veneer. The last straw was being forced in to an impossible position after languishing on long term sick for the best part of two years, 12 months without statutory sick pay and no action to get me either back in a job or follow medical reports that I was not fit to do any work at AETC, THEY FORCED MY RESIGNATION, or put simply- constructively dismissed.”

Being a news service of distinction, it’s only right and proper to give the then floor manager TG the right to reply, which he did so in a response dated 11 Sep.

Note that all names have been abbreviated to their initials to hide their identities and this statement is from the meeting after Bill made his complaint:

“Start of discussion 4.00pm
• Discussion around minutes above
• TG admitted that when Bill was working for Maint he was left to his own devices.
Whilst doing work for Maint he was normally overlooked for overtime as it was assumed he was doing all of the hours he wanted to.
Action: Bill to put himself forward when available for overtime outside of maintenance
requirements
Action: TG to review overtime on a monthly basis for the next 6 months to ensure that
Bill is getting a fair proportion of the overtime.
• TG admitted that Bill does get neglected due to the location where he normally resides
Action: AK to get records over last 10 weeks to see what overtime Bill has had compared to DG, TC and S
• TK raised issue of his medical condition and referred to normal hours Bill works.
Having reviewed this TK suggested he move to normal days. There is no need for Bill to
receive shift premium
Action: Bill to be notified of move from shifts to normal days - AK
• On the issue made by Bill that he his not best utilised by the organization TG agreed with this point and recognises the need to both manage and utilise him better. TG
recognises that Bill is underestimated and when given work he carries it out diligently and efficiently, it is only when Bill isn't tasked that there is an issue, for which the Team
Leaders and Cell Manager have to take responsibility.
Action: Team leader on shift to meet with Bill daily, for 5 mins to outline tasks required
• In addition to the above I have had brief discussions with both Bob Short and
who endorse the majority of what Bill has said.
Discussion concluded 5.00pm
Action: AK to meet with Bill to close out appeal by Fri 20th September 2004.”

Summed up perfectly by the PCC Human Resources department, “Everything agreed and accepted as above.”

Precision Cast Corps have yet to comment.
Posted by Guerrilla Democracy News at 05:05