PIERS MORGAN has launched a stinging attack at outgoing US president Donald Trump shortly before he leaves office.

Joe Biden's inauguration will take place in a matter of hours, but before Mr Trump is officially booted out, Morgan stuck the sword in.

"You blew it, Donald," he tweeted.

"If you'd shown Americans leadership & empathy when it really mattered in the past year, you'd have been re-elected.

"Instead, you failed them. Spectacularly badly.

"And now you slink off as a gutless, graceless sore loser. How pathetic. 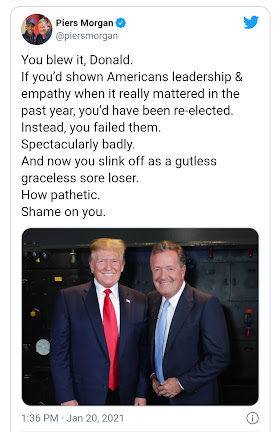 Morgan accompanied the tweet with of a photo of himself standing next to Trump following an interview two years ago, when the duo were still on good terms.

Once a close ally of Mr Trump, Morgan has been highly critical of the president, particularly in light of his handling of the Covid-19 pandemic.

The Good Morning Britain host was one of very few television personalities who would champion Trump during his first three years in the Oval Office.

The two met while during filming for the US Apprentice in 2008, which Morgan won, and they remained friends for years.

Morgan even wrote a letter to Trump in 2018, formally applying to become White House Chief of Staff, and the two conducted the president's only sit-down interview during his state visit to the UK in 2019.

But in April 2020, the bubble appeared to burst on their relationship, notably after Trump  suggested looking into "ingesting" disinfectant as a possible cure for Covid-19.

Morgan described the suggestion as "batsh*t crazy," and announced that in response to the criticism, Trump had 'unfollowed' him on Twitter.

Ever since, Morgan has remained extremely critical of Trump's presidency, and in the aftermath of the Capitol riots earlier this month, Morgan stated that Trump was "mentally unfit" to remain as president. 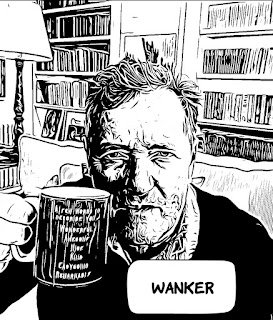 Click on the link below to watch a Matt Taylor TV special on Pier Morgan's scathing attack against his former friend, Donald Trump.

Posted by Guerrilla Democracy News at 08:38