The 46-year-old sat down for an interview with journalist Anna Brees, and in a teaser clip from the second part of the interview, the Rock DJ singer appears to question the validity of a conspiracy theory alleging that several high-ranking Democratic Party officials and U.S. restaurants were involved in an alleged human trafficking and child sex ring.

The theory was widely debunked during the 2016 US presidential election, following an investigation by the New York Times and the fact-checking website Snopes.

However, the theory has gained renewed interest on TikTok in recent weeks, and it seems Williams is also interested in the conspiracy theory.
In a clip shared by Brees, the former Take That star says: ‘Look, there might be a perfectly reasonable explanation for that language, who knows. The fact that we don’t know means that nothing has been debunked. Yes, there was no basement in the particular pizza place. That’s not the debunking that I want, as a civilian, a human that’s going “hey, this bit, this bit’s really f***ing weird, what is that bit”.

‘Nobody’s been asked, nobody’s said and there’s been no answers. But the overarching reporting on this story is debunked fake news. It’s not. The right questions haven’t been asked to the right people in the right places.

‘Just as I take my popstar hat off, my celebrity hat off, and just talk as Robert from Stoke-on-Trent, ST6 7HA, opposite the Ancient Briton, big up Stoke-on-Trent – just as that guy for a moment, that’s watching from the terraces, why aren’t those questions being asked?’ 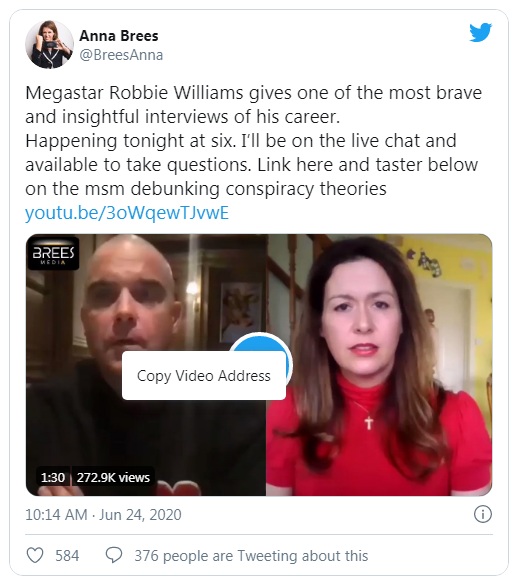 This isn’t the first time Robbie has talked about Pizzagate, as in a May interview with Chris Thrall, he mentioned a theory involving ‘a dough based food with a dairy topping on it’ and said: ‘This sort of out of control red pilling can come back and bite a lot of people in the a**e.’

After Brees shared the clip, Robbie Williams and Pizzagate began trending.  Proponents of the theory alleged that there were coded messages in the leaked emails of Hillary Clinton’s campaign manager John Podesta that connected Democratic Party officials to a paedophile ring.

As well as the theory being debunked by journalists, no alleged victims came forward and no physical evidence supporting the theory was ever found.
The rest of the interviews will be shared to Brees’ channel on Thursday (25 June) evening, but in the first installment, the popstar hinted at other conspiracy theories he believed in, with Anna writing in the video description: ‘Calling himself an interested bystander, he believes information is changing every day, but he remains curious to explore so-called conspiracy theories around the sexual abuse of children by powerful politicians and high-profile celebrities. Expressing his concern that traditional mainstream media journalists are calling stories debunked conspiracy theories without doing adequate research.

‘He feels the music industry has been targeted and that the allegations won’t go away unless they are addressed. He discusses the direct accusations made against him around satanic symbolism in his work and child sexual abuse within the music industry.’

Robbie said in the video: ‘When I see celebrities getting attacked, and I see this conspiratorial stuff levelled against people like myself and people come over to my comments section to find me to say you’re in on this hideous, hideous, the most heinous plot you could ever imagine a human being involved with and you’re being accused of that – as a human, you go “I need to say something”.

‘I have been an interested bystander, watching something that has felt fringe to me, that we mistakenly call conspiratorial. The word itself, conspiratorial, has been hijacked to mean mental person. I think that combined, we need to come up with a new word that doesn’t have the kind of stigma that conspiratorial or conspiracy has.’

Brees said that she had predicted last year that a pandemic and civil unrest was coming, and asked whether Williams had felt that ‘something was coming’.

The father-of-four said: ‘From standing on the bleachers looking on, I’ve felt something coming for a very, very long time. At the same time, I have to question my own belief in “is something really coming”? Well something’s really here.

‘Right now, the washing machine of lies, misinformation, misunderstandings, half-truths, is so pervasive that we are now in a place where our heads have stopped working.  I can’t believe that in the last 24 hours, you can be in the right side of history, and when you wake up, with your beliefs and your thoughts, you can be on the wrong side of history. And I’m not talking about the Black Lives Matter stuff, I’m just talking about absolutely everything. The sands are shifting so quickly and what you think is the real version of events gets changed so quickly that there is no way of understanding or trusting even your own narrative or your own thoughts.

‘We’re all lost in our own echo chamber and our own reality, but I have the benefit of being behind the veil that a lot of people are accusing of being up to some very nefarious stuff.’ Robbie continued: ‘If there are very very dark things that people talk about happening, they won’t come for you right now, they’ll come for me. If we go down the rabbit hole of the darkness that is supposedly pervasive and in control of the energy of the planet, I’ll be one of the first on the list.’

Posted by Guerrilla Democracy News at 08:26