Fulfilling a lifetime’s dream of holding a Churchillian-like spot at the table of world leaders, Eton educated Boris Johnson will enjoy Sunday breakfast with US President Donald Trump, during the Group of Seven leaders’ summit in the South of France. 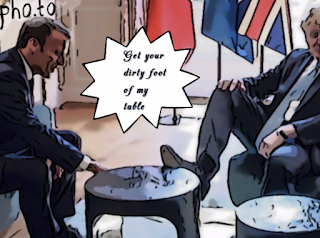 The Group of Seven leaders are represented by Donald Trump for America, Justin Trudeau for Canada, Boris Johnson for the United Kingdom, Angela Merkel for Germany, Emmanuel Macron for France, Shinzo Abe for Japan and Giuseppe Conte for Italy.

Eager to prove himself as a world statesman to a skeptical audience at home, bumbling Johnson has already caused offence, by putting his foot up on a table in the Élysée Palace during a meeting with French President Emmanuel Macron on Thursday.

Chief amongst his critics is Johnson's biographer Sonia Purnell, who tweeted, “Rude and embarrassing, Imagine if Macron put his foot on the table at Buckingham Palace.”

Granted a 30 day window of opportunity to resolve the Northern Ireland backstop stumbling block, Boris Johnson is likely to face of a ‘Vote of No Confidence’ in his Government, if a ‘No-Deal’ option remains on the negotiating table.

With the eventuality of a General Election being announced as early as 4th September 2019, Johnson is hoping this weekend goes well and that he comes across as a competent Prime Minister and a world leader of Churchwellian stature, as he believes himself to be.