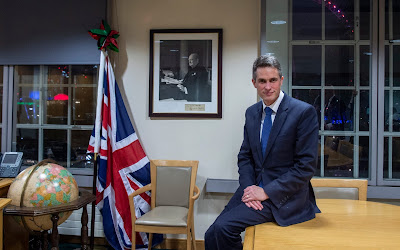 Britain will open two new military bases in the Caribbean and South East Asia as the country looks to step up its military presence overseas after Brexit, Gavin Williamson has revealed.
The Defence secretary urges Britons to stop downplaying the country's influence internationally and recognise that the UK will stand tall on the world stage after leaving the European Union.
In an interview with The Telegraph in his Ministry of Defence office, Mr Williamson says: "We have got to be so much more optimistic about our future as we exit the European Union.
PAY MORE TO READ MORE AT THE TELEGRAPH

Posted by Guerrilla Democracy News at 04:20