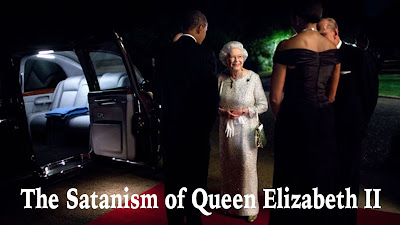 Evil Rulers are Bringing Us to Annihilation,— January 1 will be the Trigger.

The mega-financial blowout which is now scheduled immediately after New Years Day promises an almost-instant shutdown of the economies of the US, Western Europe, and most of Central and South America. It will be immeasurably worse than that of 2008 or 1929.
The most recent case which compares with the disaster we face over the coming few days, is Europe's catastrophe of the Fourteenth Century.  Then as now, a long-term rotting-out of culture prepared the way for a series of savage, anti-human acts by actually Satanic rulers which suddenly precipitated the collapse of society and mass death.  Amidst perpetual warfare, a series of famines early in the century helped to prepare the way for the evil which followed.  In 1344, the Lombard banking houses of the Bardi and Peruzzi declared bankruptcy, whereupon the Venetian banking network closed down the entire economic system of Europe, forcing conditions which further decimated the populations' resistance to disease.  The Black Death (bubonic plague) struck in 1347.  Its successive waves are estimated to have killed off 60% of Europe's population.
And now, today, in the aftermath of the vast cultural downslide called the Twentieth Century, three Satanic rulers are leading us to our immediate destruction: Queen Elizabeth, Barack Obama, and Pope Francis.
The Queen-Empress Elizabeth II is a far more knowingly evil figure than her ancestor George III who murdered our patriots over two hundred years ago.  She represents the British Empire of the Twentieth Century, of the Lord Bertrand Russell who legislated an end to science and art in favor of dead mathematics.  Like Russell, she and her husband advocate worldwide savage population-reduction, by whatever means.  That was the not-so-secret agenda of her just-concluded Paris conference on supposed man-made climate change.
The Satanism of Queen Elizabeth and her like is their drive to extinguish the "divine spark" in man,— that which makes man "the living image of God."  In other words, humanity.
It should make every Catholic ashamed,— indeed, every Christian,— that Pope Francis adopted the anti-human credo of the British Empire in his insane, raving so-called Encyclical "Laudato Si'."  He has fought for it ever since. Whatever his reasons, he has disqualified himself as Pope, even as a simple priest.
Our so-called President Barack Obama is a puppet of this Queen-Empress, controlled by the British Monarchy through Valerie Jarrett, who was the one who tapped him to be President in the first place, when he was an obscure State Senator.  It was British-monarchy controlled drug money which gave Obama a crooked victory over popular favorite Hillary Clinton in the 2008 Democratic Primaries.  (Unfortunately, Hillary has destroyed all her own qualifications since becoming Obama's puppet after his election.)
Obama was trained to be a mass-murderer by his Indonesian stepfather Lolo Soetoro.  Now, every Tuesday, he presides over a White House meeting to decide on a new list of people to murder,— including American citizens.  The reason that the major press gives him a free pass,— such as the New York Times and theWall Street Journal,— is that they're afraid he'll murder them too.  He probably will.
Congressmen share the same, justified, fear,— but they have no excuse.  The oath they took to the Constitution is a soldier's oath.  If they will not immediately remove Obama and shut down Wall Street, they are not real Congressmen at all.
In short, your leaders have sold you out to the Devil.  Your Congressmen have sold you out, in the best cases, out of fear. But the solutions which Franklin Roosevelt applied in 1932-33, in a far milder crisis, are still available today.  Only a child would talk about the "odds;" obviously the odds are against us. So what?
Source: https://larouchepac.com/20151225/evil-rulers-are-bringing-us-annihilation-january-1-will-be-trigger

The Queen has been criticised for wearing a fur coat to attend a Christmas Day mass in Sandringham.
Queen Elizabeth II was pictured wearing a brown fur coat as she stepped out of her car for the service, before changing into a red coat with a grey fur trim.
The 89-year-old has been seen in the coat on various occasions since as far back as 1961, according to Sky News. A number of people commented on her decision to wear the coat again on social media. 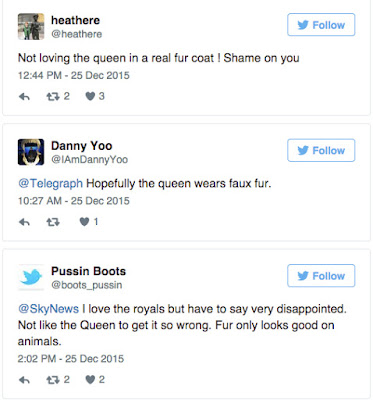 The queen wearing fur makes me hate her even morehttps://t.co/dyWZR2ULPK
— Martha (@MarthaLewins) December 25, 2015


The Queen was criticised for wearing it in 2013 by the animal rights charity Peta, who said in a statement at the time: "How can Queen Elizabeth not yet have learned what's right and wrong and abandoned fur, the product of immense suffering.
"Animals are routinely strangled, electrocuted and skinned alive for their pelts. Fur farming was banned in 2000 because it’s a cruel industry that no longer represents British values.
"We truly hope that the Queen gets with these more enlightened times and chooses to wear something more humane in the future."
The Queen attended the mass with the Duke and Duchess of Cambridge, the Prince of Wales and Duchess of Cornwall, and other members of the Royal family including Prince Andrew.
A spokesperson for Kensington Palace said the Queen was attending a private engagement and declined to comment.
Source: http://www.independent.co.uk/news/people/queen-criticised-for-wearing-fur-coat-to-christmas-day-service-a6786041.html

Posted by Guerrilla Democracy News at 03:33