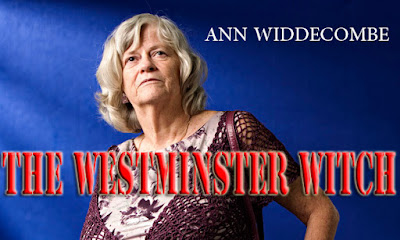 With the title- 'Take it from me, conspiracy theorists will never change their mind,' the overweight spinster ridicules those of us who believe that Dr David Kelly was murdered by secret forces, that Lady Diana was killed on the orders of the Royal Family and that Neil Armstrong ever walked on the moon.

Specifically targeting Grand-dad Chris Spivey, who having been convicted of harassing the family of Lee Rigby, Widdecombe writes:

“Christopher Spivey is a conspiracy theorist who has made the lives of Lee Rigby’s family hell. He believes, without any foundation, that the murder was a plot to whip up anti-Islamic feeling. He even claimed that the soldier never existed and his harassment of the relatives landed him in court.

The exasperated judge rightly said that nothing would ever convince Spivey that he was wrong. Every MP knows the type: the constituent who in the teeth of evidence will insist there is a conspiracy. I had one who believed I was a Freemason conspiring with the police to persecute her!”

Ignoring a wealth of inconsistencies in the official narrative, Chris Spivey isn't the only notable conspiracy theorist who believes not everything was what it seems.

Take Nick Kollerstrom and The Kent Freedom Movement for example; having published his ground breaking book on the London 7/7 Bombing 'Terror on the Tubes,' he too has visited Woolwich and has roundly disproved the official narrative of the day.

This latest snippet of footage asks the obvious question; WHERE'S THE BLOOD?

For Ann Widdecomb to imply there is no 'foundation' to the Woolwich incident, illustrates perfectly the 'Madness of Widdecombe.'

Mind you in fairness to journalistic impartiality, a comment posted by Lilly Bing states:

“I was there. I can tell you now I saw that poor man and there was blood all over the place including the 2 who carved him up. He was covered in blood and that was not photoshopped at all. The sad thing is, there are many cover ups going on but if people like this organisation disbelieve and pick apart every event, when something real actually happens they just assume you're wearing tin foil hats and have nothing better to do. The government cover up some god awful events but you're making it worse. People think you've lost the plot and you're all loonies so if you ever find a REAL truth nobody will believe you. I'm not naive I know there are many fabricated stories out there 911 being orchestrated by Bush, Haute de la Grande cover up etc but this WAS a real event. R.I.P Lee Rigby.”

Someone is lying. If someone had his head nearly hacked off, there would be an awful lot of blood, but as the video shows, no blood at all.

Its interesting Lilly refers to the “many fabricated stories of 911” & “Haute de la Grande” but gives credence to the Woolwich incident by stating she was an eye witness who saw with her own two eyes “blood all over the place,” contradicting the video evidence shown above and the many pictures published in the newspapers.

Mind you since joining in August 22, 2012 Lilly Bing has had no activity across the board, which suggests whoever Lilly Bing is, she created a Google + profile just to leave that specific comment.

We are continuously warned about MI5 operatives engaged in Social Media manipulation and this comment seems to confirm he scaremongering often spread in Conspiracy Theorist circles.

“People deny the Holocaust. They deny Armstrong walked on the moon. They believe CIA agents were hiding in the bushes to murder Dr David Kelly or that the late Princess of Wales was killed on the orders of the Royal Family. They think UFOs have landed.”


Funnily enough Nick Kollerstrom has published a book about the Holocaust; Breaking the Spell: The Holocaust, Myth & Reality.

A quote taken from the foreword by James H Fetzer.

“Dr. Kollerstrom concludes that the history of the Nazi "Holocaust" has been written by the victors with ulterior motives and that this history is distorted, exaggerated and largely wrong.”

He writes with conviction, “I am convinced beyond a reasonable doubt that this could not be suicide. The medical evidence does not support it and David Kelly's state of mind and personality suggests otherwise. It was not an accident so I am left with the conclusion that it is murder."

Once a collation MP in the Lib/Con government first as a Transport Minister, then the First Minister for Crime Prevention and responsible for Britain's equivalent to the FBI; The National Crime Agency; the Madness of Widdecombe knows know bounds as she tramples the reputation of a respected member of parliament.

“Such people all function perfectly normally in everyday life and before the birth of the internet most conspiracy theorists were harmless and caused no greater sensation than incredulous laughter in a pub. Now they can disseminate their views sufficiently widely to hurt survivors or families and even attract others to their causes.”

“It is possible that the conspiracy-theory label has simply lost some of the power it once had,” Wood writes in the journal Political Psychology.

I'd go so far to suggest the label of Conspiracy Theorist has lost its negative connotations, for the simply reason the researches like Nick Kollerstom, Chris Spivey and Richard D Hall (amongst many many more) have put forward such convincing hypothesises of national and international events, that the Powers That Be, simply cannot explain their actions away.

THE PEOPLE REALLY ARE WAKING UP!

After-all a You Gov poll in 2013 revealed a whooping 38% of British people didn't believe Princess Diana died in an accident. 33% were bold enough to say outright they believed she was assassinated.

Even Queen Elizabeth II, upon hearing the news of her death, is alleged to have commented:

“Someone must have greased the brakes.”

Now even the Queen is a Conspiracy Theorist.

DID MAN WALK ON THE MOON?

With extraordinary footage like the clip below reveals; the question of whether Neil Armstrong really stood on the moon is a question worth asking.

The Madness of Widdecombe really does know no bounds.

“It is right that Christopher Spivey should have been prosecuted if only in order to protect Lee Rigby’s family but he will go to his grave believing the rot he promulgates.”

I dare her to say that to his face. Taking into consideration the nightmare Chris Spivey has endured at the hands of Essex Police and the Social Services, I find it incredulous that a retired Tory grandee can condone an illegal prosecution, an affront to British justice and an abuse of a man's human rights, for doing nothing else but flagging up a false flag events which has enormous repercussions to the British people and Britain's way of life.

“It makes me wonder whether there is still anybody around who believes Earth is flat.”

PUT THIS IS YOUR PIPE & SMOKE IT.

AND WHILE YOU ARE AT IT; EAT THIS TOO!