I got it! I've worked out why we continue to take their shit. 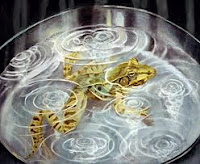 A frog placed in boiling water, will jump out, where-as a frog placed in cold water that is slowly heated, will not and will be slowly boiled to death; perfectly illustrates why people continue to take shit from above.

Of-course the story isn't literally true, doubters will complain, but it is. It just all depends on how slowly you raise the heat. In 1869, German physiologist Friedrich Goltz demonstrated that if you raised the temperature of the water from 17.5 °C to 56 °C in about ten minutes, or 3.8 °C per minute, the frogs will attempt to escape, where-as if heated over the course of 90 minutes from about 21 °C to 37.5 °C, a rate of less than 0.2 °C per minute, the frog will float there quite placidly, and as the water gradually heats up, will sink into a tranquil stupor, exactly like one of us in a hot bath, and before long, with a smile on its face, will unresistingly allow itself to be cooked to death.

This is what is happening to us.

In the same way frogs boil happily to death, humanity is doing the same by simmering in shit, since 1066.

If we were to be plucked out now we would be amazed at what we've consented to. War! Poverty! Injustice! Child-abuse! Crime! Income Tax! Fines! Interest! Insurance! Statute Laws! VAT! Bedroom Tax! Means Testing! Politicians! Ian Duncan Smith and Piers Morgan!

We will be amazed by the amount of shit we've been happily simmering in, without realising we're being simmered to death.

We haven't jumped out because the simmer has been so gradual.

Since 1066 when the conquering Norman's occupied British soil, we've been consenting to their shit ever since. We complied to their Domesday survey because we had no choose. Nearly 950 years later we are still filling in their surveys and still taking their shit, but now we have a choice.

We think we have no choice but we do.

Take a look at the dates below. Eight foreign royal dynasties dumping their shit on us since 1066. Each dynasty has inflicted their own unique and self styled shit. But each dynasty has ultimately come to an end. All dynasties come to an age. In fact by working out the average, each dynasty lasts for 106 years. So as you can see, the Windsor royal family is running out of steam and we have an opportunity to jump out of the shit.

Read the Royal Halloween Special to find out how a revolution will happen in 2016.
Posted by Guerrilla Democracy News at 12:33

Email ThisBlogThis!Share to TwitterShare to FacebookShare to Pinterest
Labels: 1066, simmering in the shit