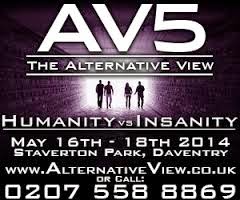 This year's AV5 Truth Conference has come to an end, but its after-math is still be felt.

While it's organiser, Ian R Crane can claim AV5 to be the best “Alternative View” ever, the stories behind the scenes have yet to be told.

With the AV5 conference taking place at the Staverton Park Hotel in Daventry, over the weekend of May 16th-18th 2014, no-one could have predicted the random events which were to bring so much drama.

The first any delegates knew of Greg Nikolettos arrest was when the conference's MC Daisy Jones announced that Greg wouldn't be giving his presentation because he had been taken to hospital.

Greg is the founder of ‘We The People Will Not Be Chipped’ website.

Conflicting with eye witness accounts that Greg was arrested by police officers and that there were no ambulances nor ambulance staff involved, Matt Taylor an alternative amateur journalist was the first on the scene to report the breaking story.

Having to miss Mike Mitcham's presentation on The Smart Agenda, Matt Taylor first questioned PC Chris Bates from the Northamptonshire Police, getting nothing from him except, “I cannot reveal anything. Ring 101 for further information.”

Onto the hotel manageress who refused to even talk about it, leaving it to her assistant manager, Liam to say, “We cannot comment on anything.”

Fears were immediately raised when eye witnesses recounted how Greg had told them the night before that he felt “scared” following death threats against him and his children.

Greg Nikolettos was originally booked to give part one of his presentation on Transhumanism on Saturday 17th at 8pm, but beset with technical problems and claiming his computer had been hacked, was forced to abandon his presentation.

Having flown in from Brisbane Australia, and detained in Dubai for two days, this was said to be Greg's last public appearance.

Billed a successful entrepreneur within the sports supplement field controlling one of Australia largest distribution companies, Greg claims to be a billionaire.

This is an amusing quote from an AV delegate called Stuart, “I brought him a drink and then he told us he's a billionaire and he didn't even buy me a drink back!”

He also owns the rights to BPM Labs and Spawn Nutra which have world distribution. He has a background in Information Technology with a minor in Philosophy. Having worked for the largest company in the world namely Apple and also Xerox he has been privy to information that the general populace would not be aware of.

Having got no answers from the police and hotel management, the only person left to ask was Ian R Crane the event's organiser.

A Truth Cover-up at a Truth Conference.

At this point in the day we knew:
Matt Taylor said, “I was frantic with worry. Here we were at a Truth convention and one of our own had been arrested and taken away, and no one seemed to care.”

Thomas Sheridan, a fellow speaker at the event and an independent alternative artist and author said, “Don't care,” and shrugged his shoulders to the news.

Rumour was strife that Greg had been “wired” the night before and due to mental problems was unable to “keep it together.”

During the next few hours, and having taken further witnesses statements, the full picture became clear.

Nothing to see here ladies and gentlemen, move along please.
With tensions still raw, Ian R Crane remained furious at having a camera stuck in his face and being put on the spot.

“You can wipe that footage,” he demanded defiantly of Matt Taylor.

“That was a cheap shot,” Ian R Crane said, to which Matt replied, “Cheap shot? That shot cost me at least £500 thank you very much.”

Matt Taylor defends his actions by saying, “Ian R Crane should have given us a better answer. By our very natural of being 'Truth Seekers' we are highly strung when it comes to people in power evading honestly asked questions. It would seem that Ian R Crane questioned my motive and called into doubt how concerned I was about Greg's situation. I like many people are very concerned about Greg and simply wanted to know what was going on.”

While Ian R Crane did clarify the situation as he closed the conference, the truth is still clear. He behaved just like the politicians we are attempting to expose and defeat. In light of Ian R Crane's “No Comment,” it can be argued that the AV movement is as susceptible to cover-ups as any other movement out there.

As a member of the public called PavlovsBitch commented on an AV themed Video.

“Ian Crane at a 'truth' conference? Says it all, says it all. The Liars convention unite, more like. Even the term 'truth' has been corrupted to the point of meaninglessness, well done, smucks.”

The good news is that Ian R Crane settled our fears at the end of AV with the following update:
We can only trust that Greg is back in Australia with his wife, son and family.

Do come again Greg. Just don't get yourself arrested you crazy Aussie!

Posted by Guerrilla Democracy News at 08:21