IS BEN FELLOWS A LIAR?

Fresh doubts have surfaced concerning the testimony of Ben Fellows, who alleged he was sexually molested by Ken Clarke, the prominent Conservative heavyweight and Minister without portfolio.

Ben Fellows, an investigative journalist and a crusader against corruption, posted an open letter to Ken Clarke which alleged:

·        Ken Clarke grabbed his cock
·        The incident was secretly filmed by the Cook Report
·        John Major, as Prime Minister at the time, covered up the evidence by conspiring to dispose of the incriminating tapes, with the contrived Carlton Communication takeover of Central TV
·        David Cameron, as head of Carlton Communications at the time, helped dispose of the incriminating tapes
·        That Sir Andrew Lloyd Webber stuck his tongue down his throat when he was a child

Publicised on the popular alternative blog site The Needle, fresh doubts have been posted which contradict the testimony of Ben Fellows and points to the conclusion that he has lied at worse or is a victim of mistaken identity at best.

It reports that David Henche, (2012 Political Journalist of the Year) and a senior journalist working for The Guardian newspaper with the Cook Report,  knew exactly what went on during the Cook Report investigation into Cash for Questions.

It was the witness statement taken from David Henche which saved Ken Clarke’s reputation and ensured no further investigation into the matter.

He says ‘The most egregious error that he has made, and one that could have far reaching consequences for many others, is the allegation that Ken Clarke molested him. This is completely untrue. Ken Clarke was never involved in the Cook Report investigation into Cash for Questions in any way, shape, or form. Ken Clarke was Chancellor of the Exchequer at the time and the idea that he would be hobnobbing with Ian Greer is simply ridiculous.’

Shying away from calling Ben Fellows a complete liar, he offers an olive branch with the theory that it was all a case of mistaken identity.

He says ‘That said there is another man who Ben Fellows almost certainly would have met during his time working on the Cook Report and that is Sir Peter Morrison, “a known pederast”, who was so close to Ian Greer that he actually had a desk in Greer Associates’ office.

Incredible as it seems, that ‘a known pederast’, a word which I had to look up, meaning ‘a man who has sexual relations with a boy’, enjoyed a close relationship with Ian Greer and actually had a desk in Greer Associates office.

So in all likelihood, Ben Fellows is telling the truth about being sexually molested in Ian Greer’s office, but it wasn’t by Ken Clarke, but was actually Sir Peter Morrison.

After all, their resemblances are remarkable.


With the numerous blogs, articles and comments about Ben Fellows circulating the internet, the reader is left scratching their head.

‘Where’s the proof?’ and with no proof forthcoming the goodwill to Ben Fellows is fast evaporating.

‘Finally! Ben Fellows has fooled a lot of people. He makes many claims that he can’t back up. He like’s pulling on heart strings and asking for money too! People should be very wary of him. He is as dodgy as they come. I’m glad people have started to see through his bullshit. He and his wife should be ashamed of themselves.’

With the support of leading alternative media personalities such as David Icke, Bill Maloney and Chris Spivey, this scandal is set to run and run.

As is common with politics, the Aye's equal the Nay’s and whether the truth will ever get out is anyone’s guess. 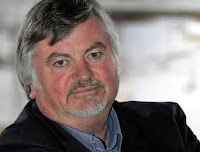 As the main man with the show named after him, surely if anyone knows the truth, its Roger. I wouldn’t be surprised if a copy of the film existed, Roger would have it.

Roger Cooke, where are you? Throw your hat in the ring please and prove one way or other, is Ben Fellows a liar?

Posted by Guerrilla Democracy News at 08:36