With the death toll raised from seven to eleven, disturbing evidence has been reported by respected ufologist Richard Lennie and astro-photographer John Lenard Walson, that the tragic Shoreham airport crash of yesterday may have been caused by a collision with a ufo.

“I'm going out on a limb here but with 4 hours of checking a video of this air crash from Shoreham I'm convinced the cause of the crash was from an unidentified flying object, In this case a white sphere hitting the under belly of the aircraft as it performs it's loop thus taking the vintage Hawker Hunter jet out of control. There is a mark on the right flap of the wing where the sphere seemed to hit, maybe this is the cause of the crash..!
There are so many anomalies in this video that it's just unbelievable..!! R.L.
My sincere condolences go out to all the family and friends who lost loved ones.!” 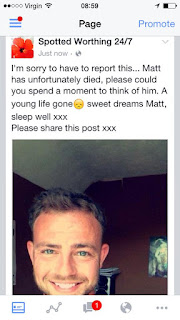 With Sussex Police pushed to the very limits of their operational abilities, a major operation is still underway which will see the main artery into Brighton, the A27, closed until well into next week.

Praised for the swift response of emergency services, the former RAF pilot of the downed Hawker Hunter jet Andy Hill, remains in a critical condition in the Royal Sussex County Hospital having been pulled alive from the burning wreckage.

While no one can under-estimate the horror to befall the innocent souls lost, ufologist and ufo abductee, Richard Lennie maintains his belief that a ufo collision was to blame.

“I would say the ufo was playing with the plane as they always do and this time it got it wrong, game over.! It was only a question of time. That's why I have been saying ''is our skies safe''..!”

Sussex Police have been informed of the situation and are said to be 'very grateful' for the information. They have since made a public announcement that no further footage of the crash be posted in social network sites.

“Yesterday onlookers filmed footage from the Shoreham aircraft crash - some have posted this footage online. Some of this material could be very distressing for the families and loved ones of the victims, so we are asking for anyone with footage to please consider their thoughts and feelings before posting. If you’d like to help with the investigation by supplying this footage to us please do get in touch by emailing your contact details and details of what you filmed/photographed (not the actual footage) to shoreham.aircrash2015@sussex.pnn.police.uk.”