Jesus the Nazarene did not die on the cross, he survived and fled to South Wales with his family, where-after he was known as The Lame Fisher King.

That being said, the true story of what happened 2000 plus years ago in Jerusalem, during the religious Passover festival, is a story unlike you have ever heard before, but which is verifiably true, by simply re-reading the copious ancient material at the disposal of historians, which is otherwise overlooked, miss categorized, deemed a fake or hoax, or even intentionally hidden and suppressed.

What really happened during the Jerusalem Passover festival in the year of our Lord, Jesus the Nazarene, was that JC with his merry band of disciples, plus 30,000 followers, descended on the Roman controlled city with only one intention in mind - REVOLUTION!

A quote from ‘Where Jesus is Buried’ states:

“It all started when Jesus the Nazarene decides to enter Jerusalem riding on an Ass and the foal of the Ass.” 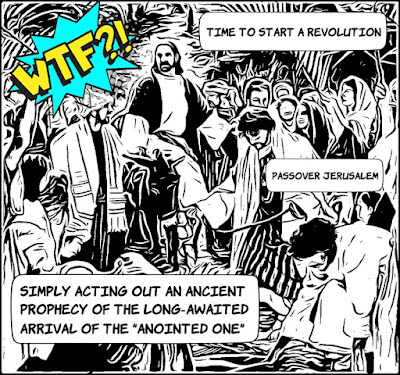 More a street performance in today’s sense of the word, Jesus Christ simply acted out an ancient prophecy representing the long-awaited arrival of ‘The Anointed One’, during a time of intense religious fervour and whirlwind expectation of the imminent coming of a ‘Saviour,’ who would change the world. This would surely cause massive repercussions, and would infuriate a brutal Roman Empire who were having enough trouble suppressing Arab up-risings elsewhere in the Middle-East.

A Street Performance Guaranteed to Cause Uproar!

As Wilson and Blackett mention it, “It was the first action in an attempt to seize control of Jerusalem.”

TIME TO START A REVOLUTION!

“When the attempt to take the Temple failed these thirty thousand dispersed and the Egyptian ran away.”

Its an important distinction to make, when JC was referred to as ‘the Egyption,” because JC married a famous Egyptian princess.

As Wilson and Blackett point out on the opening page of Chapter 6 of ‘Where Jesus is Buried’, The Strange Crucifixion;

The Storming of the Temple

“It was impractical for many thousands of people, often coming from huge distances, to bring their pairs of pigeons, their lambs, and their bullocks, into the city for ritual slaughter offerings for the God Yahweh.

Wilson and Blackett’s version of events varies vastly to the story sold to us by the Roman Catholic Church.

We’ve been sold the version that Jesus went on the rampage in the Temple, outraged that commerce was being conducted in his ‘Father’s Home.’ When in actual fact it was an attempt to seize the Temple and as a result, seize control of Jerusalem.

This was a concerted effort by Jesus, his disciples and 30,000 followers, to play out the aged old prophecy of ‘The Anointed One’ coming to Earth to rule the World in Yahweh’s name.

This was the start of a Revolution against the Roman Empire, and of-course there would be consequences by Rome to anyone and everyone who dares to challenge Roman rule.

Insurrection was punishable by death.

“The Anointed One and his followers stormed in the great Temple and there, in the outer Courtyard of the Gentiles, they proceeded to cause mayhem by throwing over the tables of the money-changers.” 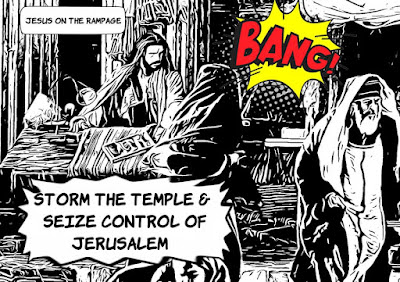 Without the two hundred Temple guards and the additional five hundred Roman City guards, coming to the defense of Jerusalem, Jesus's revolution would have been successful.

“This caused a panic and in the pandemonium that followed, as the over-excited and disorganized masses, who had come to the Passover Festival tried to flee, thousands were trampled in the narrow streets of the city of Jerusalem. The attempt at sparking a revolution had failed.”

And now the crucifixion story takes a new path, of which has been suppressed for the last 2000 plus years.

The capture of Bar Abas - the son of Jesus

“Then came the really bad news when Jesus the Nazarene was informed that his son and heir known as “Bar Abas” or “Jesus bar Abas” - the ‘Son of the Master (Jesus the Nazarene) - ‘Jesus the son of Jesus (the Nazarene)’, had been captured by the Roman city guard. The Romans now held all the Aces in this political pack.”

While JC managed to slip out of the city, hidden by his disciples and 30,000 followers, the Romans did what came easy to them; they kidnapped what was most important to him, his son.

“The fact is that the Romans had captured the “Son of the Master” who was called Bar Abas, and a deal was being negotiated to get this Bar Abas free.

The only way to do this was by an exchange of prisoners, and the Romans would almost certainly accept the surrender of the leader Jesus the Nazarene in exchange for his son. This arrangement had to be very carefully managed because it would involve the all-powerful Roman Procurator as well as the local Tetrarch the Prince Herod Agrippa, and the Sanhedrin of the High Priests.”

What followed next was to be an act of subterfuge which has been hidden from public knowledge for the last 2000 plus years.

Evident from his marriage and personal popularity, plus his own parentage, Jesus was the Superstar of his age. With 30,000 followers hanging onto his every word, and connections with the elite of the times, Jesus had friends in high places, and the motivation to save his life and the lives of his family, would have been the highest priority for all those concerned.

This is where Joseph of Arimathea comes into play. Though before we touch on Joseph, we need to mention Judas.

Contrary to what the Bible tells us, Judas was in fact Jesus's brother and most trusted confidant. As ‘Where Jesus is Buried’ explains:

“The deal for the release of Bar-Abas.

This was then done and all that followed will be explained later. Everything that took place in the release of the young man who was the Roman prisoner in the Garden of Gethsemane; the peaceful surrender of Jesus the Nazarene;  the extraordinary rapid events of night-time and early morning trials, and the strange and unusual crucifixion, revolved around the guaranteed release of Jesus Bar Abbas -  the ‘son of the Master’. The Gospels record how a young man clothed in a sheet was allowed to run away from the Garden when Jesus was arrested.”

While we have been led to believe Judas was a traitor, the truth was very different.

“The subterfuge demanded that Judas must appear as a traitor.”

For the last 2000 plus years, we have been told that Judas was a traitor who sold Jesus out for 30 pieces of silver, while ‘Where Jesus is Buried,’ reveals a different picture of Judas being Jesus's brother, and his most trusted confidant, entrusted with an act of deception, essential to make Joseph of Arimathea’s plan to work. 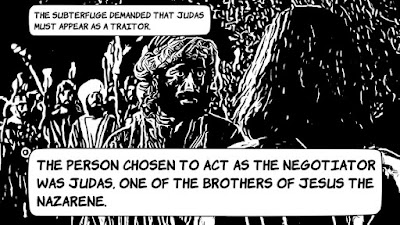 Did you know that the crucifixion actually took place in Joseph of Arimathea’s private garden?

Don’t worry if you didn’t, because billions of devoted Christian’s across the world didn’t know too!

Back to ‘Where Jesus is Buried,’ which states:

The role of Joseph of Arimathea

It is equally obvious that the shadowy Joseph of Arimathea was already involved in the conspiracy, and his participation was vital to the success of the plan. He was friendly with Pontius Pilate, the Roman Procurator, and Pontius Pilate wanted no further trouble in Jerusalem, or in Judea in general, as he was not liked by the Emperor Tiberius.

The events that lead on from the betrayal of Judas is well documented in today’s Bible.

His disciples joined him for the infamous Last Supper.

With the 30 pieces of silver paid to Judas, the plan was rolling.

“Jesus gathered his few remaining followers at the Garden of Gethsemane and waited for Judas to bring the soldier to arrest him.”

“The other Disciples didn’t have a clue what was happening, and Peter - who appears to have been something of an oaf - drew a sword and he hacked off the ear of one o the soldiers, before he was restrained.”

The exchanging of Jesus for his son.

In the middle of the action of arresting and Jesus, and taking him into custody there was the key moment of the Soldiers allowing a young man wearing only a sheet to run from the Gardens.

This would have been the agreed exchange with Bar Abas - the son - being set free in order to get Jesus to surrender.

Its well documented what happened next!

Jesus was then shuttled back and forth between Pontius Pilate and Herod Agrippa, as Pilate was “clearing the decks” by courteously allowing a Herod Agrippa to officially affirm that he had no interest in whatever Jesus had done. The final scene - that we doubt happened - was that Pilate asked the assembled crowd which of the two prisoners he should punish.

Agitators in the crowd who were there to make certain that the plot should succeed shouted and demanded that Bar Abas should be set free and that Jesus must be the one to be punished -  which was precisely what Jesus and his close associates wanted.

If there was such a crowd scene it had to be Jesus who was selected, as Bar Abas his son, had already been released in the Garden during the previous night. 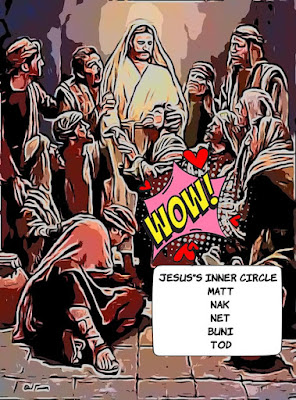 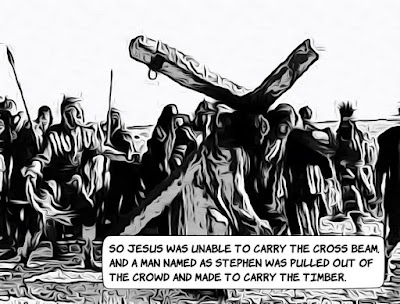 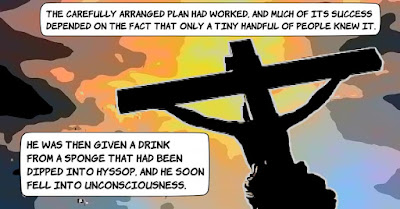 Order Where Jesus is Buried.

Written by Alan Wilson and Baram Blackett, and compiled by K.Ross Broadstock, ‘Where Jesus is Buried’ finally blows the lid off the best kept secret of the last 2000 plus years. 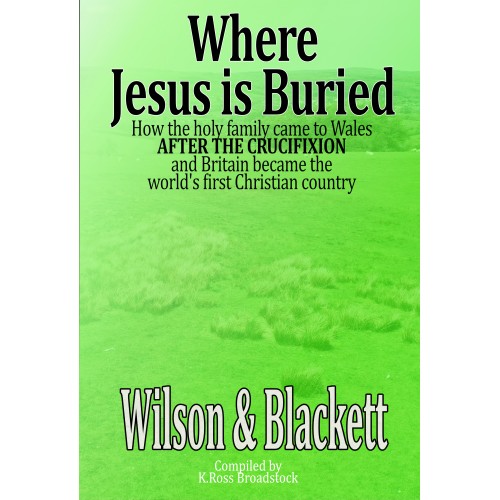 BUY NOW!
A Special message from Richard D Hall...
Greetings,In the past Richplanet has stocked history books by Wilson and Blackett,who have researched and presented extensive evidence for the existence ofKing Arthur (and many other historical eras). I am pleased to say that Inow have new stock of many of their titles.If you're interested in their work and want to see what is available,please follow this link ...https://www.richplanet.net/store/index.php?route=product/category&path=59_83To view all Richplanet book titles follow this link,https://www.richplanet.net/store/booksIf you haven't heard of Wilson and Blackett, the link below lists all theprevious Richplanet shows which feature their plight and their research ...https://www.richplanet.net/richp_search_menu.php?searchtext=Wilson+and+BlackettThanks,Richard

Posted by Guerrilla Democracy News at 09:58