Political commentator and Royal Commission Witness, John Paterson from Sussex, has called for a General Strike in the UK over the Christmas period, to bring attention to the insidious and satanic corruption at the heart of the British Establishment. 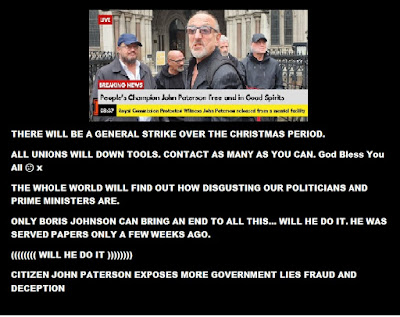 Having served papers on the Prime Minister, Shadow Prime Minister, Cabinet Ministers and other persons of notable positions of power; Paterson confirms they are all now fully aware of the extent of the corruption within the British Establishment.

Whether those who are guilty are prepared to wave their white flag and surrender, or fight on while trapped in the corner, Paterson is adamant, ENOUGH IS ENOUGH.

John Paterson warns, "We have their IP addresses, just waiting for the right time.TICK! TOCK!"

Stating his obligation to his God, country and conscience, John Paterson believes that having been made aware of the massive corruption within the British Establishment, which has effectively stolen the Pension Pots of all Public Sector organizations, he is obliged to do all he can to expose the criminals, hiding behind the facade of the great and good in society.

Paterson is quoted to have said,

"As you are aware, I do not make idle threats that cannot be carried out. This afternoon we are making a video naming names that will undoubtedly bring this whole disgusting saga with the BBC, Mr D, Karen Irving, WPC Katy Latham, DC Martin and many others to THE ROYAL COURTS OF JUSTICE.

This Video will be made and held for 48 hours. IF DC Andy Grimwood contacts me within 48 hours, I promise 100 percent it will be held back until many people I have so far named are arrested and taken in for questioning.

I WISH TO AVOID THE DEATHS OF THOSE WHO MIGHT BE INNOCENT AND CURRENTLY BEING BLACKMAILED."

"THIS HAS GONE ON FAR TOO LONG"

John Paterson, a London-based political commentator, believes lobbyists have a high influence on many top officials in the country. “Very senior politicians in the government are controlled because of money they are taking,” he told Press TV’s UK Desk on Sunday. Paterson also made reference to cases of official scandals and noted that lobbyists use their clout over politicians through money and information they gain on them.

Posted by Guerrilla Democracy News at 09:13