A “Particular Individual” who I would rather not name accused me of harassment and stalking. 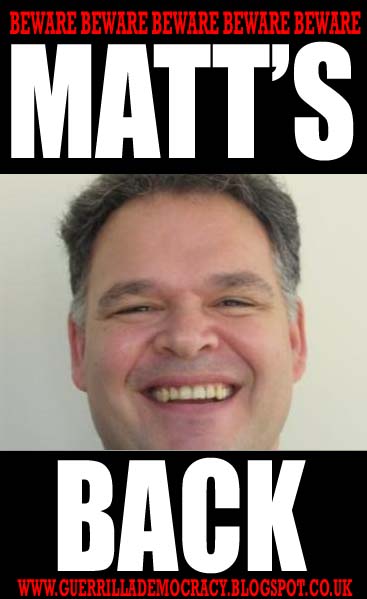 Can you believe it? Me; harassing and stalking anyone! I’m the embodiment of good citizenship and the last thing I’d ever do is intentionally cause another person undue alarm or distress.


As I pointed out repeatedly to Surrey Police Detective Constable Andy Grimwood, everything I’ve ever written and published about the “Particular Individual” has been to prevent and detect crime.


I was arrest during a dawn raid on the 20th February 2017. All my computer equipment, camera, diaries, data-chips, CD’s and notebooks were seized and haven’t been returned since.
All charges were dropped by June 2017, when the Crown Prosecution Service (CPS) decided that there wasn’t the evidential evidence to meet their Threshold Test and that no further action will be taken.
Read more: http://aboutmatttaylor.blogspot.co.uk/2017/06/im-back.html
Posted by Guerrilla Democracy News at 08:02