Chris Spivey shits on the memory of Max Spiers – A Special Report by Matt Taylor.

Considered an 'Internet Troll' by the mainstream media and a 'hero' by his supporters, Chris Spivey has poured scorn on the memory of Max Spiers, by claiming he's a 'crisis actor' who never existed.

Max Spiers died in Poland in July 2016, which many people in the Alternative Media believe was murder.

Called the new kid on the block and a Super Soldier, said to be manufactured by the US military for black op military operations; Spiers died unexpectedly having coughed up a black liquid, which many believe was a symptom of poisoning.

In his article 'The Brady Bunch', Spivey writes “Well I’d never heard of him until last week!”

Spivey admits to not playing any attention to what's written in the Alternative Media, and is clearly ignorant of the players and shakers in the fledgling movement.

Championed by Miles Johnston, the organiser of the Bases Lectures, Spiers was a regular speaker at his lectures and a well known speaker at other Alternative Media conferences and radio shows.

In fact when asked about Spivey's claim that Spiers was a crisis actor who never existed, Johnston replied in no uncertain terms, “Total Bollox.”

Spivey, who has recently been cleared of possessing illegal pictures of children, is adamant that Spiers is not whom he appears to be.

Essentially Spivey believes Spiers was in fact a made up victim in the Paris attack, as this screen shot from his article  'Qui, Qui, Poo, Poo'  shows. 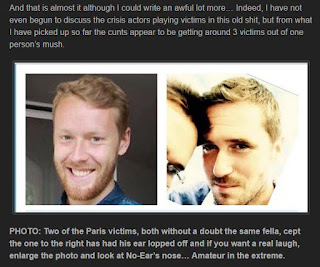 Spivey is under the impression that a secret style Ministry of Magic, is at work behind the closed doors of Westminster, which create personas by using facial prosthetics to hook-wink the public in believing the personas are real.

For example, Spivey believes Prime Minister Theresa May is a made up persona, accompanied with a fake history, in which all pictures of her childhood and early adult life are photoshopped, and that she wears a prosthetic mask, to hide the fact, she is a crisis actor working on behalf of the insidious shadow government who really rule the world.

Dismissing all claims that he's got it wrong, Spivey ridicules anyone who believes Spiers was a real person.

“Now I have to say that it troubles me greatly that so many supposedly enlightened people buy into this old bollox.

So I will repeat: Spiers was an actor… The Go-Fucking-Fund-Me pages are to scam the public.
Indeed, I had a 2 hour telephone call with Spiers alleged ‘fiance’ Sarah Adams a week or so ago and although I found her to be very pleasant and nice to talk to, I am afraid to say that rather than convince me that ‘Max’ was the genuine article, the complete opposite is true.”

Amazed at the audacity of Spivey to shit on the memory of a fellow activist in the Alternative Media, I've been eager to hear other people's views on Spivey's connection that Spiers was a fake entity.

I asked Rosette Delacroix, who runs a very successful Youtube channel in which she decodes the hidden messages within films and TV series, for her comment, to which she replied:

“Anyone that actually KNEW Max knew that he cared for humanity and children above all. Everything he did was towards truth and exposing the injustices of the world. So with that said, would it make any sense that he worked as a crisis actor??? That would imply he was working FOR the ones he despised and was trying to expose! Does that make any sense at all? NO. He is dead because he cared for us.”

I personally didn't know Spiers, but as a fellow Brightonian, I did feel we had something in common. We even exchanged a brief conversation on Facebook's messenger service, in which he enquired about my well documented arrest by Sussex Police in January 2015. 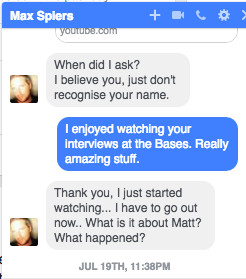 According to Spivey's arch rival and nemesis Jimmy Jones aka The Outlaw;

“It is my view that Spivey and his ilk are simply, egotistical narcissists who target anyone who has seen through the wall of bullshit they have built, and is simply throwing his toys out his pram like the spiteful and overgrown toddler he apparently is. But I could be wrong.”

While Jones could be wrong about Spivey; Spivey could be equally wrong about Spiers. The disappointment arises from the fact that Spivey doesn't necessarily prove what he says.

Apart from publishing half faces stuck to others, with facial recognition software making a comparison in percentage points to their familiarity, Spivey relies on his strong character and his army of loyal minions to push forward his views, even though his views fly in the face of common sense, reality and reason.

Perhaps a comment left by Strontium Dog on the 2 September 2015 Outlaw's article 'A price on her head,' best sums up Spivey's secret agenda.

“Could it possibly be that Spivey is there as a plant to publicly discredit the AM so they are all dismissed as aggressive, deranged thickos?”

NOTES TO THE READER

What do you think? Do you believe Max Spiers was a crisis actor who never existed?

Do you believe Spivey's contention that people in Government are playing multiple characters, by wearing prosthetic masks to hook-wink the public?
Posted by Guerrilla Democracy News at 05:32