THE ARGUS- A TRAVESTY OF DEMOCRACY.

While the new editor of The Argus basks in the sunshine of glory following the perceived success of his Argus ‘Tri-Lateral’ Hustings on Tuesday 9th May at the Thistle Hotel in ; the coming volley of questions may yet see The Argus with egg on their face following their Travesty of Democracy.

Admitting exclusively to Guerrilla Democracy News, Mike Gilson conceded the complexity of holding a hustings of this magnitude is “very difficult.”

Mike Gilson is quick to remind us that he, as an editor of a newspaper, is under no legal obligation to report all the candidates in any given election.

He explained that he may choose to only write about the top three parties who scored most in the last general election, thus effectively dismissing any Independent candidacy and committing a travesty of democracy by omitting to report to his readership that there are any Independent candidates running in the Brighton Kemptown election.

As the 's Professor of Journalism questioned himself in his own Argus column, “Matt Taylor the ‘Independent’ candidate for Kemptown, inexplicably left off the platform.”

“INEXPLICABLY LEFT OFF THE PLATFORM.” 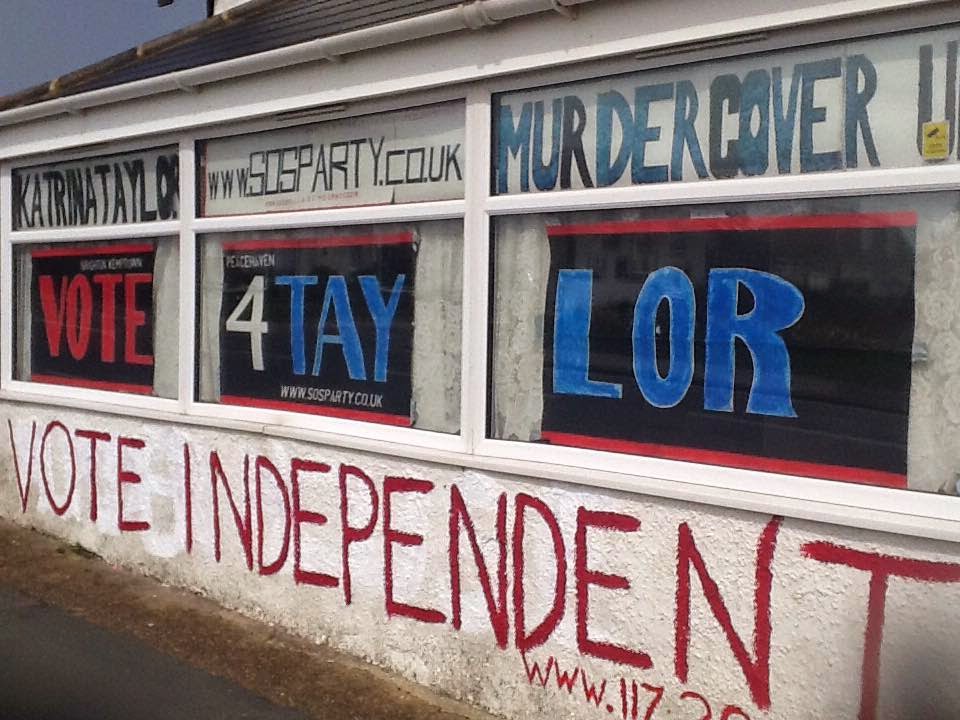 By introducing the “main” Brighton Kemptown candidates, Mike Gilson omitted any “independent” or “other” candidates.

Would it really have made any difference if an Independent was added?

“For Goodness Sake, Vote Independent on Independence Day 7th of May and I’ll champion a Law in which every Local Council must conduct a Hustings in which it is compulsory that all candidates are included,” said a distraught Matt Taylor outside the Thistle Hotel! 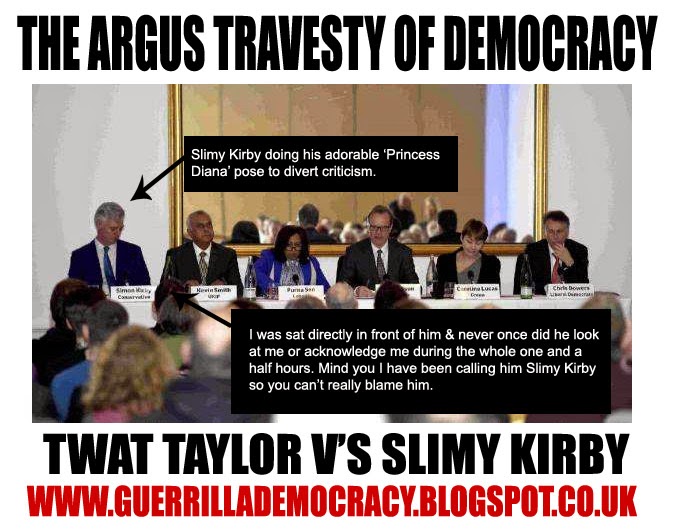 “I don’t understand how a reporter gets to decide what proportion of truth he gets to report to the public?”

Out of 90,000 registered voters in only a handful of men and women have stepped forward to run as parliamentary candidates.

THE ARGUS PROFILES FOUR AND IGNORES THE FIFTH.

It’s a travesty of democracy that Mike Gilson didn’t invite an Independent representative onto the platform at the 7th of May hustings. 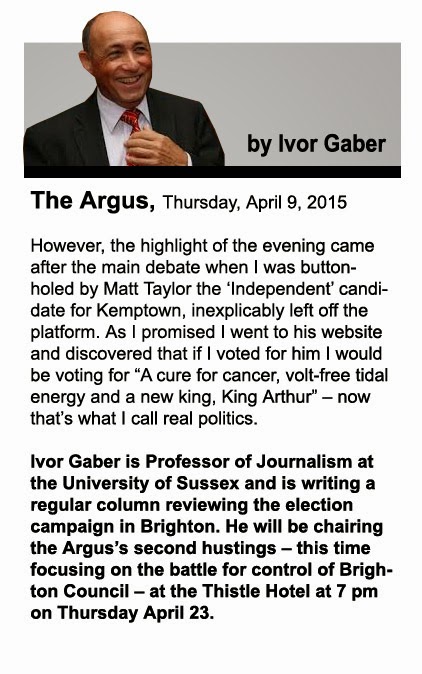 “This was to be my opportunity to address the voters and convince them that I can be the best MP who’s ever served Brighton Kemptown, but Mike Gilson performed a travesty of democracy and decided to omit me from the platform.”

Which brings use onto the next question; would one more person have made much difference?

THE ARGUS TRAVESTY OF DEMOCRACY

It’s a terrible shame because there were such high hopes for Mike Gilson.

Read what was written about him when the news broke; MIKE GILSON TAKES THE HELM.

At least the Ivor Gaber mentioned an independent was running. Left to Mike Gilson no one would have known.

“SHAME ON YOU MIKE GILSON.”

By omitting Independent candidates from the hustings platform and from the pages of ’s Argus, Mike Gilson is committing a travesty of democracy and a great disservice to his readership.

Thanks for giving me your time the other night at the Hustings. It was a pleasure to meet you.

You mentioned I should send in my stories; how about this breaking story?

Yesterday I was approached by M*** W****, who was the person who attacked us on the 16th January 2015 at our election campaign office, when after calling the police, we were arrested and locked in a police cell for the next 12 hours.

While he had my complete attention he stuck a post-it note on his dashboard with my home address on it and said, “Remember I used to live around the corner from you.”

What would happen if this happened to Simon Kirby or Nancy Platts?

What headline would you use?

Please Mike, don’t push me into the corner. I am a valid alternative to the main stream parties and I’m begging you to promote my story.

This is real and I’m not making anything up. I’m standing on a platform of anti-corruption and integrity and honesty in public office.

The crooks in are fighting back and are now resorting to threatening my family to get what they want.

Thank you for you assistance,

Posted by Guerrilla Democracy News at 13:37