Following an appeal by the team at UK Column for more promotion in social media sites, we at Guerrilla Democracy are happy to promote the UK Column as the new 1 O'clock news of Great Britain on a daily basis.

As Mike Fisher from the British Association of Anger Management would say, “To assume makes an ass out of you and me!” We only assume that you are aware of the UK Column, though if you aren't allow, us to introduce them to you. 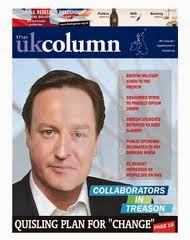 We've been subscribed to the UK Column for the last few years, at £15 a year its money well spent. Publishing a monthly newspaper and broadcasting a daily news shows, The UK Column are steadily becoming the new 1 O'clock news, which people watch above and over Sky, Channel 4 and BBC news.

Its the type of news show which you'll want to see, because it's free and easy. Brian Gerrish and an assistant sits in front of camera, while feedback is given by guests and a producer out of view, but who can hear.

Its a fantastic format, which I'm sure Sky, Channel 4 and the BBC will soon follow. Its a much more relaxed format, in which the team tells the viewer what they think from a personal point of view. Its a natural exchange of ideas and information. Its real and relevant. Its easy going and flowing. Its the best news program being broadcast across the British wave-length. 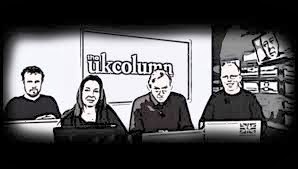 With regular presenters such as Brian Gerrish, Mike Robinson, Louise Collins and Malcom Massey broadcasting from their Plymouth TV studios, they often have guest speakers appear, via broadband such as Patrick Henningsen from 21st Century Wire and Ian R Crane, a geo-political expert and anti-fracking crusader.

I became a devoted fan after watching a news broadcast in October 2012, featuring Pie'n'Mash film director Bill Maloney. We don't exaggerate, but we consider this news show to be the most important news show you would ever watch. The information within is surely earth shattering, and if only the numbers that watch the BBC 1 O'clock news would watch this, we would be living in a very different United Kingdom.

The most important news show you would ever watch

Posted by Guerrilla Democracy News at 08:24