In a blistering defence of his character and reputation, Chris Spivey has responded angrily towards allegations he used reader donations for his own material ends. 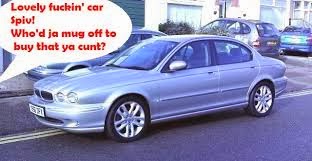 Unlike the many personalities Chris Spivey exposes in his many articles published on his website www.chrisspivey.co.uk, Spivey answers his critics rather than remaining cowardly silent like The Queen, The Duke of Edinburgh, Lord McAlpine, Tom Watson, Hein Grosskopf, Gerry McCann and many many other famous personalities he writes about.

After an absence of nearly a week due to technical problems where his website was off-line, Spivey bounced back with his usual dose of biting opinion and extreme controversy.

First amongst many being John Ward of The Hard Slog blog who accused Spivey of being “horribly offence” in posting this “charming cartoon”. 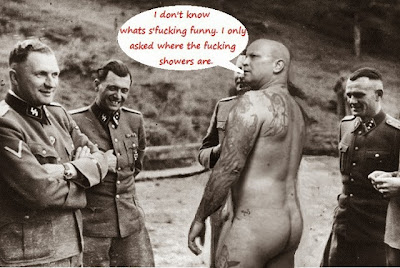 “Ny-eece. Not so much Holohoax, perhaps, as hollow joke,” says John Ward, “I’ve always had my doubts about Chris, but after this post I’m sorry, I shall not be able to take him seriously about anything again. Read the post and, if you really understand what The Slog is about, you’ll agree with me. The sum foundation upon which Spivey bases his conversion to denial of the Holocaust numbers is ‘Well, as it happens I got sent some information on this subject the other week. And, having now read it, I have to say that I agree. The figures and official narrative most certainly do not add up.’ He can’t identify his source, but it is ‘a respected author’. David Irving by any chance? 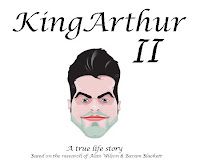 Who's David Irving? Check him out here. And while you may be interested in British history, you must check out the research of ancient British historians Alan Wilson and Baram Blackett. Their research of what happened before 1066, is truly mind-blowing. King Arthur I and II, The Holy Family, where Jesus settled after he survived the crucifixion, an asteroid devastating Britain and heralding in the Dark Ages and- saving the best till last-, King Arthur II saving his people by sailing 700 ships to America and settling in Kentucky; where he was tragically assassinated by a Red Indian. You cannot make this up! This is ancient British history. The King Arthur Conspiracy is the Great Conspiracy of all Time because the proof is laying six feet under the ground... Check it out!

But back to Spivey, where was I?

Branded as a “Foul mouth screamer of The unatic Fringe?”, The Unatic Fringe, surely he must mean The Lunatic Fringe? (Which comfortably describes my style of political thinking!) John goes on to make his criticism complete with a reference to Spivey's offer to goto Boston and call the alleged victims of the Boston Marathan Bombings, liars to their face; but only if they stomped up the air-fare, “Couldn’t afford the fare to Washington, eh Chris? Ne’er mind: I can get you a good deal on Virgin.”

Way ahead of his competition.

Boasting of being way ahead of his competition and having no interest in what anyone else in the Alternative Media has to say, Spivey goes onto high-light eight allies for special praise.

Henry from the Tap Blog.

http://the-tap.blogspot.co.uk/
The Tap Blog is a blog written (mostly) by the readers. It's become a channel where the most amazing revelations have been, and continue to be made. It's a journey of discovery, open to all, where ideas, thoughts and information are shared.

“The first to offer me help – and more or less from the moment I started being targeted to boot.”

Jimmy Jones at the Outlaw.

http://outlawjimmy.wordpress.com/
Encourages people to look at other things with an equally critical eye and be able to see the bigger picture.

“Who has passed me all manner of information in the past, which has never been less than 100 percent spot on… Disinfo merchant my fucking arse.”

Steve and the lads at VoxInfo Media.

http://voxinfomedia.com/
The purpose of Vox Info Media is to offer the following: a voice that has often been silenced, information that has been hidden from us and a range of media to enlighten, inform and entertain.

http://www.alternativenews.net/
A selection only the best of the alternative news sources to help you find a non-corporate spin.

“What that old bastard said about me nearly brought a tear to my eye… Nearly, but not quite.”

Big Jim from The Rock Show…

“I really am surprised that we havent had the heavy knock on the door after Monday nights show.” 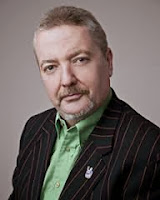 http://www.redalertradio.co.uk/news.php
The truth is here! Join alex:g as he digs beneath the headlines and discover what’s really going on in the world. Seeking the Peterborough view on national and international topics, they expose what’s happening behind-the-scenes, and the reasons why it will devastate our communities.

John Hamer, author of the Falsification of History.
This book relates the current, insidious plight facing the human race as a direct result of a grand deception that has been imposed upon it for tens of thousands of years if not longer. 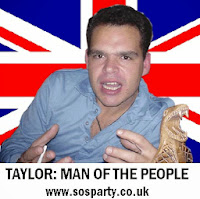 http://www.sosparty.co.uk
Independent Politician and Man of the People.

“The slightly eccentric, but a fucking nice fella all the same, Matt Taylor.”

Spivey explains, “All of the above offered either help, advice and/or support for which I am extremely grateful… And I wont forget it. Apologies if I left anyone out and as I say, there are many more genuine writers, broadcasters and news sites in the AM who as far as I can see are all on the level.”

SPIVEY REVEALS HIS SOFT-SPOT.
“I don’t think you are a bunch of cunts at all. Truth be known, I have a bit of a soft spot for you all.”

LEAVING US WANTING MORE AND IN NO DOUBT HOW SERIOUS IT IS.
“I have however got half way through writing a major new article which I think will more than interest you all, and I have also been made privy to information that would shock every cunt in the country had the AM had any credibility amongst the masses … I will share that information with you once I get through doing the usual checks and research. And no doubt by doing so,add another letter to my death warrant… But fuck it, that’s the kind of guy I am.”
Posted by Guerrilla Democracy News at 04:01