A shocking claim has been made by Satanic Ritual Abuse (SRA) survivor Jeanette Archer, that Robert Frith, (a 65 year old man arrested alongside SRA crusader Wilfred Wong and five others, for allegedly kidnapping an eight-year-old child), was murdered in Berwyn Prison, having been found hanging in his prison cell.

During a 47 minute LIVE Facebook broadcast, Jeanette Archer explained in stark terms, that she did not believe Robert Frith committed suicide, but was instead killed.

She said, “Unfortunately the news that came in about Robert Frith was true. He had died. He was found hanging in his cell. Now I posted that because I want you to know that was exactly that, he was found hanging in his cell. Not he had killed himself. Not he has hung himself. Because I don’t believe, and one day I might be proven wrong, but I do not believe, knowing what I know, that Robert killed himself. I do not believe that. I believe that he was murdered and I am going to call it as I see it. I believe he was suicide'd by the satanists.”

“I believe he was suicide'd by the satanists.”

Speaking about the developing story in which six people were arrested last Saturday (14th November) for allegedly kidnapping an eight-year-old child, and for the first time introducing a SRA element into the narrative, Jeanette Archer (53) herself a SRA childhood survivor, spoke passionately, cool and calmly about the man at the centre of the story, 65-year-old, ex barrister Wilfred Wong, and the circumstances which led up to their collective arrest.

“It was a success. For quite a while until they got caught 200 odd miles later. They almost made it. They almost saved that child. “

“Wilfred has saved many children over the years and helped many mums or dads escape with their children to rescue them out of cults.”

“He has done so much good work, he is devoted. Wilfred was a barrister. He had a successful career and he gave it all up to do this. He’s been doing this fight for nearly 30 years.”

While the mainstream media are sticking to their story of a child kidnapping at knife-point, the Alternative Media has been ablaze with speculation, rumour and innuendo, calling this a ‘rescue’ rather than a ‘kidnapping’.

The most recent example of this, was the rumour that Wilfred Wong had been admitted to hospital having been castrated by fellow inmates.

This was addressed by Archer, when she said, “There was information that came out that Wilfred was in hospital and I put a post up when I got this information because I felt, I owe that. Because when information comes in, even though it comes to me, I don't own it and I need to share it. That’s my duty. I took it back down because I soon then realized that it may not be completely correct. Even though it came from a very credible source.”

Claiming her “credible source” were two “amazing women” whose partners were also in Berwyn Prison in Wrexham, North Wales, Archer continued, “I also started to suspect that this may have been satanist at play, because psychological warfare is a big thing for them. And they know that if that message got out, that Wilfred was in hospital, the details of him being hospitalized were awful, and if that information got out, we’d all be very frightened.”

“So I started to probe a little bit more and a couple of other guys within our team were probing and what we know at the moment is, is likely that he hadn’t been hurt and that he’s OK.”

“The thing is the satanists will be pulling all these tricks right now, OK.

As well as claiming the father of the eight-year-old child is a satanist, Archer goes further to claim that the police officers involved in apprehending Wong and his accomplices, were also part of a satanic ring, operating in the Anglesey area of North-West Wales.

“For those who know me, know my story and watch my lives, know that there are satanic police. And how it works is for example, this satanic cult, which is based in Wales, the local police to that cult, will have satanists in that police force. Because if ever anything ever goes wrong they know the right people to phone. So it’s safe to say, the people who caught Wilfred, and the mum and her baby, her child, would have been involved with that cult.”

While SRA is generally viewed as a ‘myth’, and various SRA stories of the past labelled ‘Satanic Panic’ by the general press, Archer is part of a growing movement of SRA survivors coming forward and telling their stories.

Either recounting true life memories or stoking the fire of a new satanic panic, Archer speaks with conviction and authority of her past and her determination to stand up for fellow SRA victims and whistle-blowers.

“The absolute tragedy to this situation is that the child was returned to the cult, to the father who is the satanist. Back into the hands of him and the cult. So that child is now back in and being held in the cult.”

“That’s the absolute tragedy here, because as we know there are thousands and thousands of children being held in satanic cults in the UK alone. And as you know, I was one of those children. Which is why I speak out now. Which is why I feel it’s my duty to put myself at risk every single day to do this, what I’m doing and the love and support that comes into me is very much tied into a lot of worry for me and I appreciate that. Because yes, of course I am a target but I will not, I will not, stop doing this out of fear.”

“I’ve spent so many years of my life being in fear. My whole childhood was dominated by fear and terror and I know a lot of you guys get frightened. But it will not come even close to what a child goes through at the hands of these cults, at the hands of satanists. And all the other children who are abused, sexually abused in our care homes. Look into the stories of our Beech Home team. That have been through atrocities, that if you haven’t been through it, you could never even start to imagine how it feels.”

“We have to fight with everything we have, against the evil that is dominating this planet. And that isn’t something I say lightly. It is dominating our planet. But the good news is there is far more of us than there is of them.”

“It’s going to get worse before it gets better.”

Following in the footsteps of decades of SRA scandals, most recently hitting the news

headlines with the news that BBC DJ and children’s TV presenter Jimmy Saville, was

part of a SRA ring; Archer is viewed by her supporters as a champion and support for

both herself and Wilfred Wong is so strong, that a vigil is being planned for

Wednesday 2nd December 2020 at 12 pm, outside of Berwyn Prison, designed to lend vocal

support to Wong and the others caught up in this child rescue satanic nightmare. 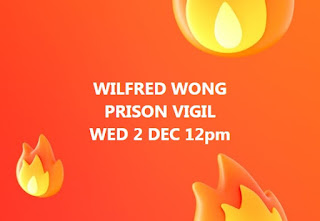 freedom and support to tell their stories.

“I know better than most how they operate. And i just want to stop them. It reminds

me and what I think about every single day, of the children who remain captive in

the cults, like right now as I’m speaking to you. Children are being tortured

“We have to use this situation to up our game and fight even stronger.”

“Of course there are survivors that have moments of, you know, feeling frightened and wanting to just hide away so not to attract attention to ourselves because we know the consequences of that and we know how we are brainwashed and programmed to be silent.”

“This kind of stuff, the message they send with Robert, and the rumours they started about Wilfred being in hospital and putting Wilfred in prison in the first place. All this stuff is to silence us. Its messaging.”

“There is nothing they could ever do that will stop me, ever!” 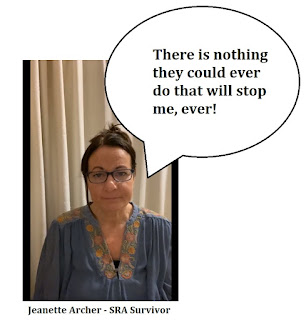 Posted by Guerrilla Democracy News at 13:22